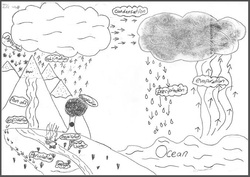 The water cycle is also known as the hydrologic cycle. It’s the passage in which water recycles around the Earth. The same water has been on the earth for millions of years, there is never any more or less water. There are many steps in the water cycle including evaporation, transpiration, condensation, precipitation, sublimation, infiltration and percolation.

When animals breathe, their lungs release water vapour to the atmosphere. This is called respiration.

Transpiration is the procedure of water evaporating from the surface of leaves. Ground water is carried through the roots to the under-side of a leaf, and then comes out through tiny pores. It then evaporates into vapour drops before dispersing into the atmosphere. The rates of transpiration get higher with the higher temperatures. During plants growing season the transpiration rates are highest due to more sunlight. If there is no air movement around the leaf the humidity of the air rises causing less water to evaporate.

There is a stage between the sublimation and it’s called supercritical and it only occurs with carbon dioxide. Sublimation takes place in the water cycle because it takes ice or snow and turns it into a gas. The opposite of sublimation is deposition and water vapour turns directly into ice or in the form of snowflakes. This occurs in higher altitudes.

In the water cycle, water vapour in the atmosphere condenses then it becomes a liquid. Condensation can be high in the atmosphere or at ground level. Clouds form when water vapour condenses, it becomes further concentrated (dense). Water vapour condenses around tiny particles called cloud condensation nuclei (CCN). CCN can sometimes be specks of dust, salt, or pollutants. Condensation is the reverse of evaporation. Like evaporation, condensation is in influenced by the sun. As water droplets combine with each other, grow in size, clouds develop, and precipitation may occur. This is called coalescence.

Water vapour in the air condenses and falls back to the earth as rain. Precipitation occurs when too much water had condensed that the air cannot hold it anymore. When clouds get heavy, water starts to fall back to the earth; it can come down in a form of rain, hail, sleet or snow.

You can see water every day in the form of lakes, rivers, rain and snow. There is a lot of water that is unseen because there is water that exists underground. Another term for ground water is aquifer. Even though groundwater is unseen, it is moving right below your feet.  Groundwater takes a major part in the water cycle because many streams and rivers have a strong influence on river and wetland habitats for plants and animals.

When water precipitates onto the earth’s surface without it infiltrating or evaporating it becomes runoff. Run off is the process of water flowing over the grounds surface to reach streams or oceans. Many streams water supplies come from surface water runoff.

Infiltration is the entry of water from ground level into the soil. The water that gets soaked into the soil is the only source of water to maintain plant growth as well as supplying ground water for wells, springs and streams. Percolation is when the amount of water that would fill a sponge descends through rocks and soil. It can move through cracks in rocks, gravel or sand. These terms are often interchangeable. Seepage is also similar, it is when water slowly moves through soil and rock before it is stored underground. 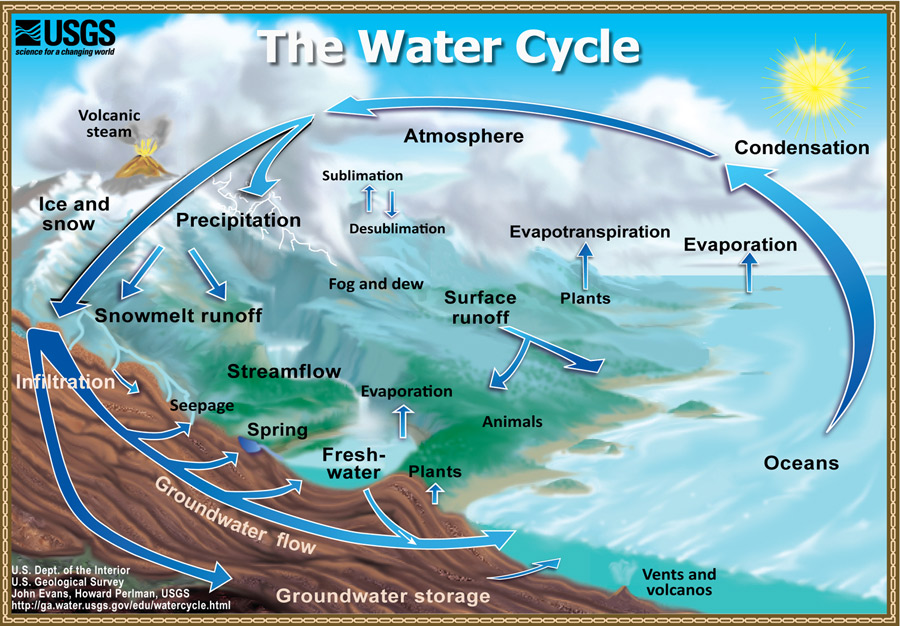